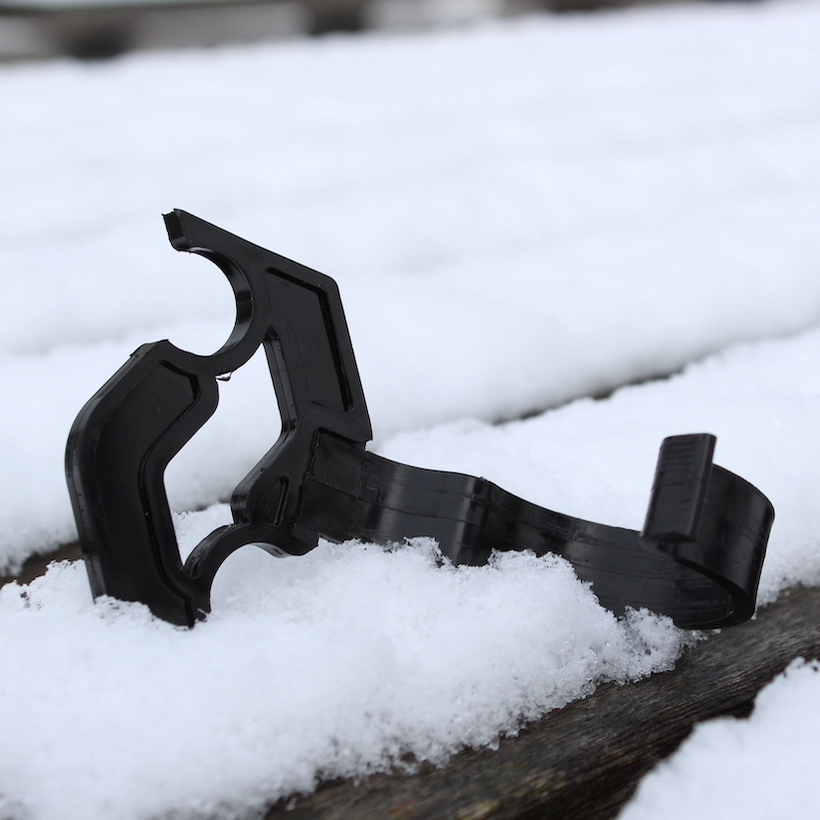 Discipline
Manufacturing Design
Product Design
Project Overview
A brief was set to help develop skills in mass production starting from the conceptualisation stage through to mould manufacture and widget production. Material choice was also explored, deciding which polymer would be most suitable in context.

This 12 week project consisted of creating a personal widget concept which was developed into a feasible mould tool design for production. After this, as a group of 7, the most feasible widget design was chosen to be taken forward into the manufacturing stage
Team Size
6
Skills
Prototyping
Mass Manufacture
Computer Aided Design
Machining
Mould Production
Design, develop and prototype a small promotional widget made using injection moulding techniques 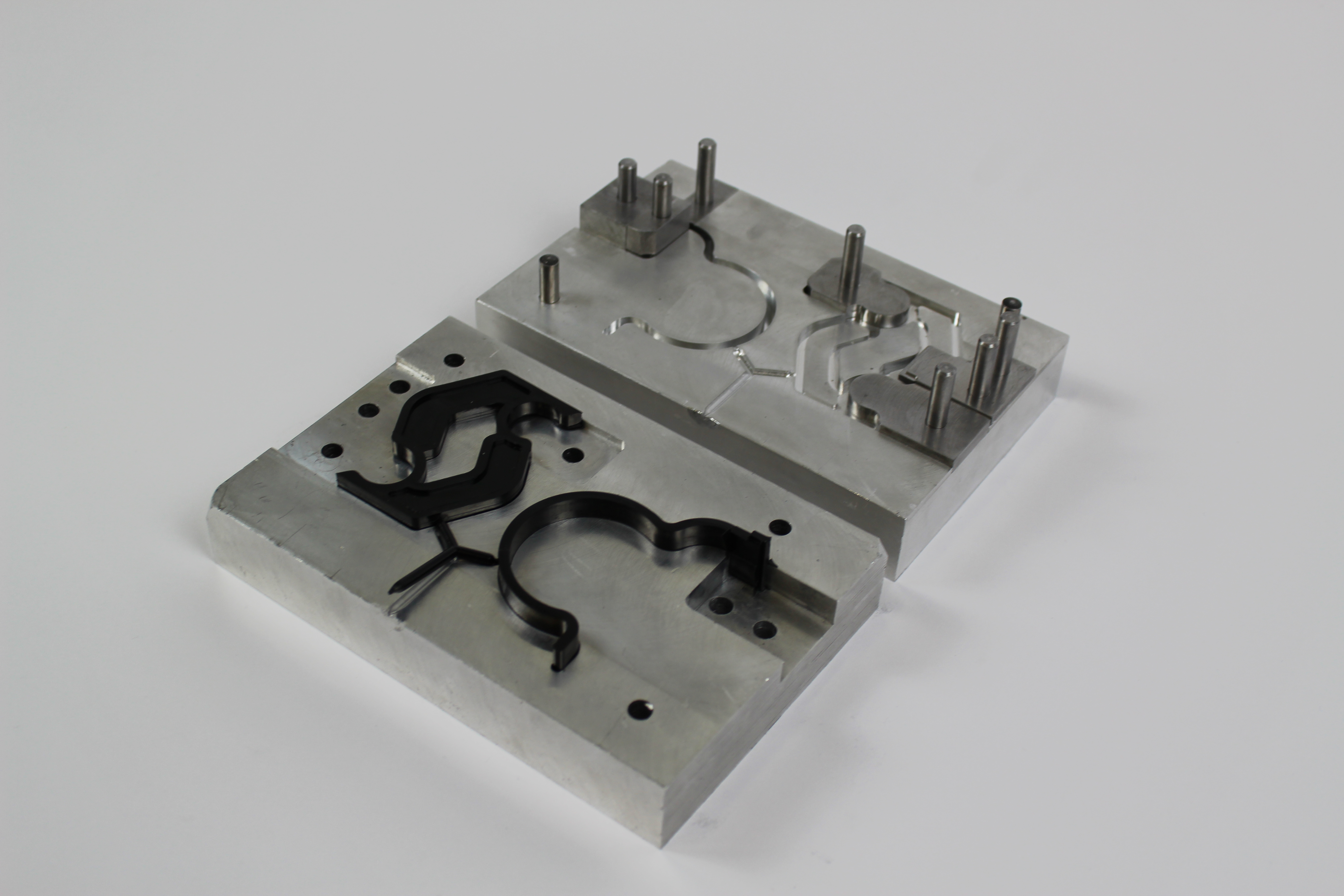 Collaboration
As a team we collaborated ideas in order to choose which widget would be most suitable for manufacture. Insert complexity, CNC capabilities and time constraints were all considered during the process of selection and a decision was made to manufacture a ski pole holder.

Engineering drawings were tagged with post it notes where improvements could be implemented and any problems that need further consideration before manufacturing could begin. 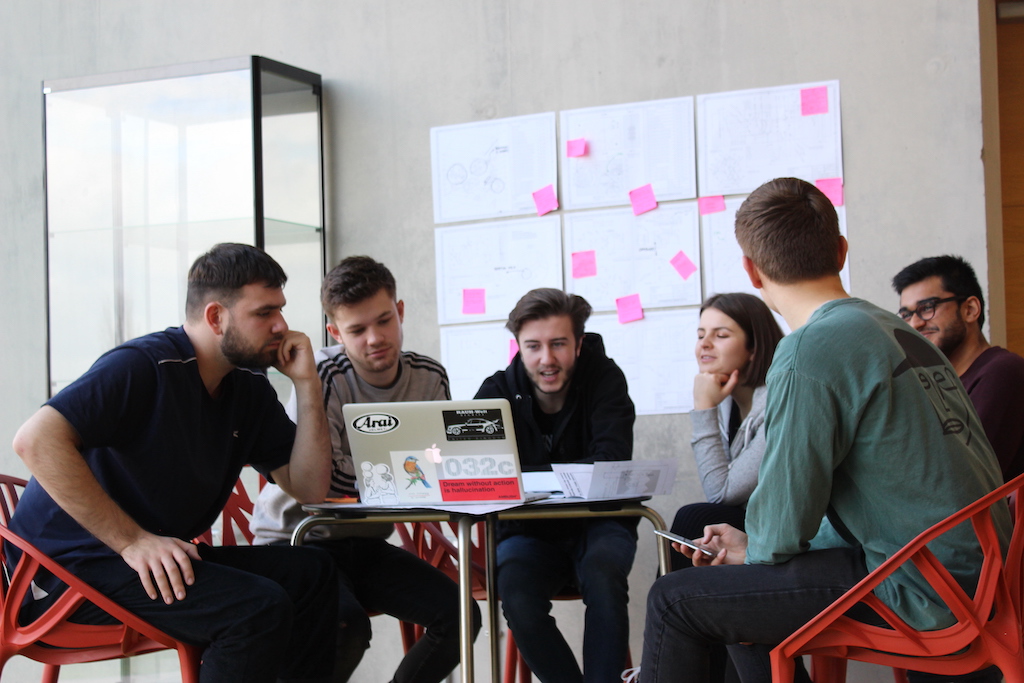 Selected Concept
The widget was designed to be given away at promotional events and at ski stores to promote the sports brand Scott.

To avoid users having to carry their skis on a ski lift the widget allows them to clip them in place and then clamp the widget on to a ski lift. This leaves them free to take pictures and such on their ascent, whilst being able to simply pull the widget off the ski lift when disembarking. 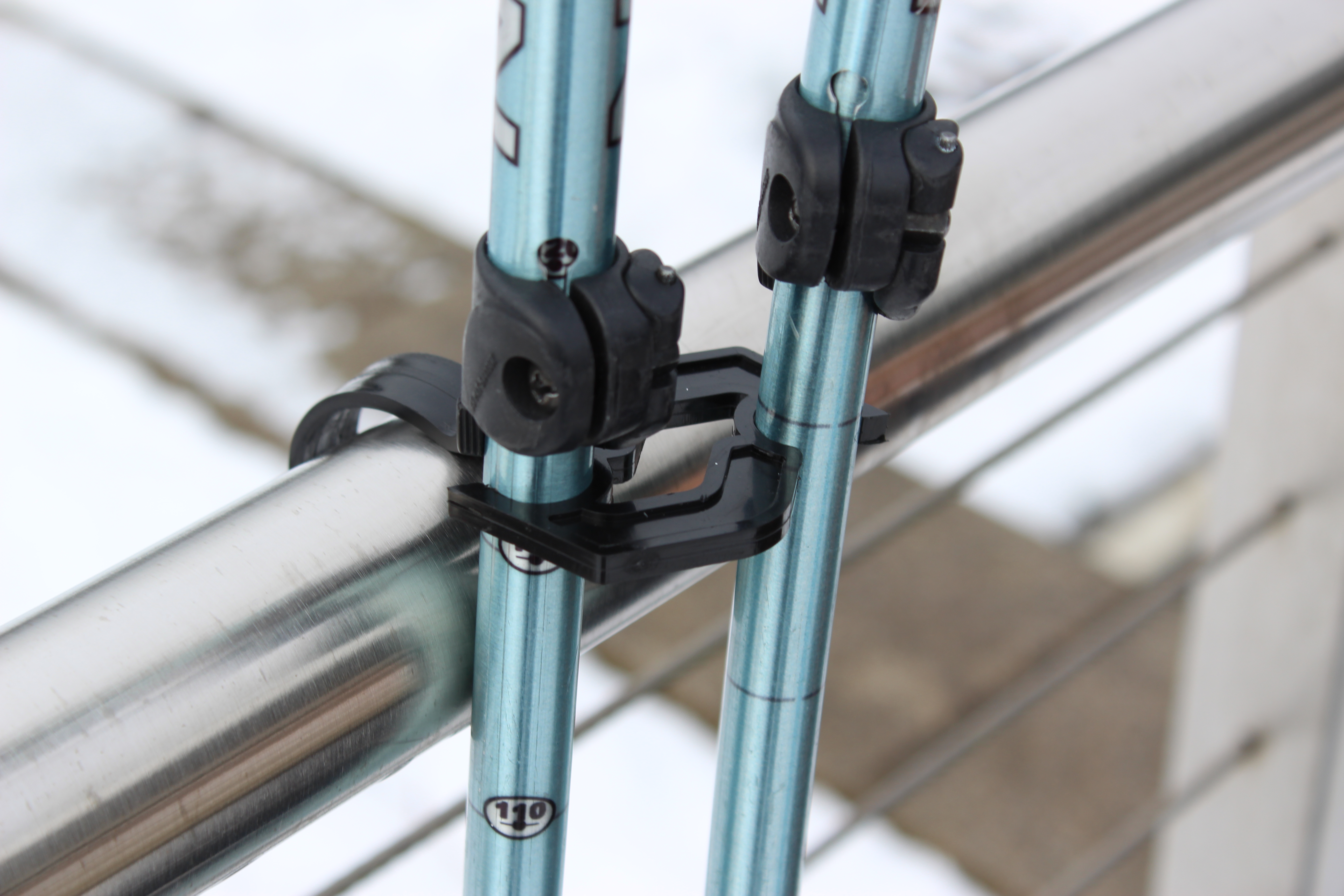 3D Printing
An initial prototype was 3D printed to get a sense of proportion and also understand the geometry that needed to be injection moulded. Adjustments were made to the thickness of some sections to avoid deformation due to non uniform fills. When attaching the two parts together there was slight deformation around the corners, to counter this problem the joint section was thickened to create a more rigid wall. 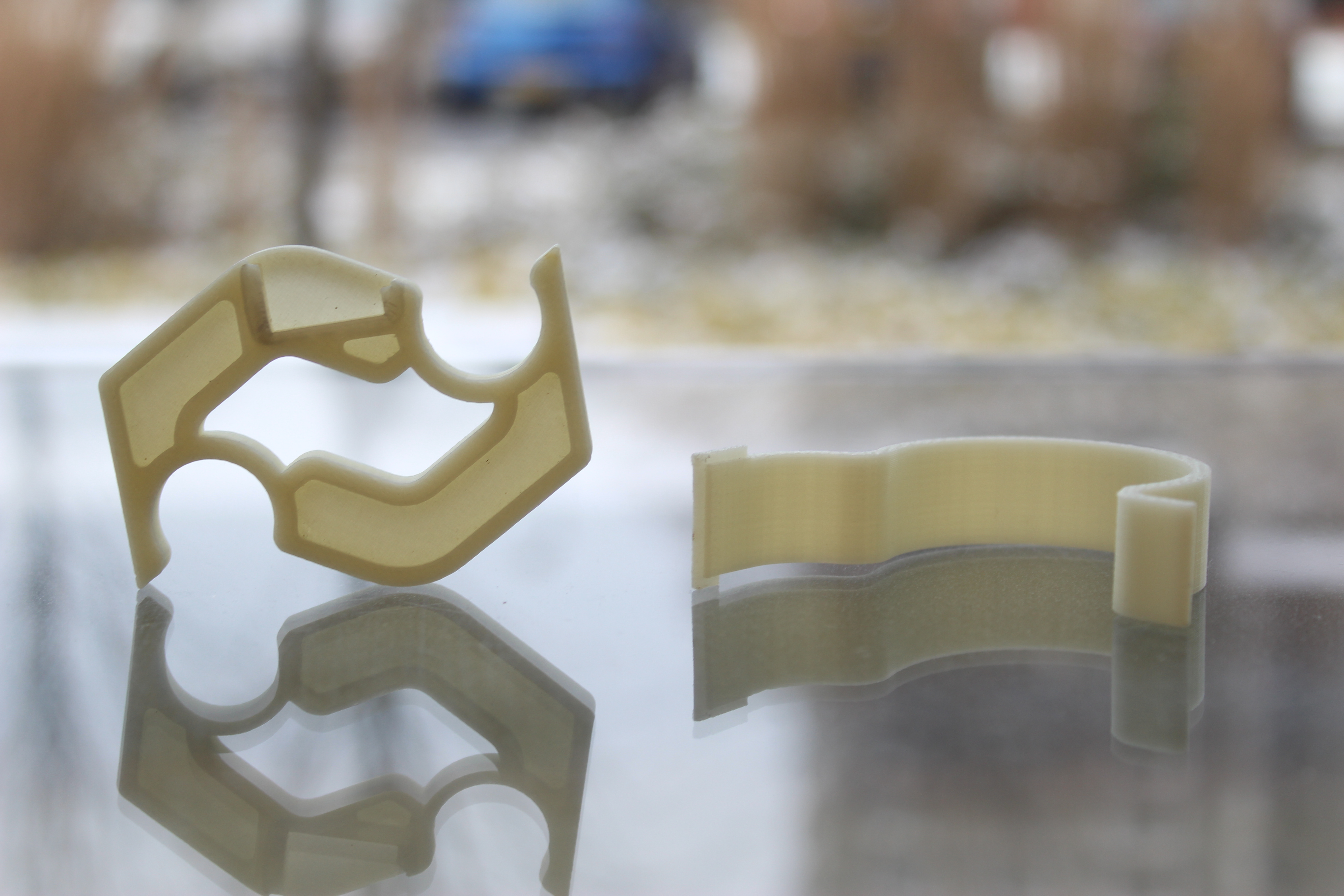 Foam Modelling
Blue foam was put into a CNC machine to test tools, tool paths and to highlight any problems before we moved on to manufacturing on an aluminium block. Due to blue foam being a low fidelity method of prototyping, fine details cannot be picked up, because of this a small amount of excess material was found on the finished aluminium block. This fault was only faintly visible on the blue foam model and could have been avoided by using a denser foam. 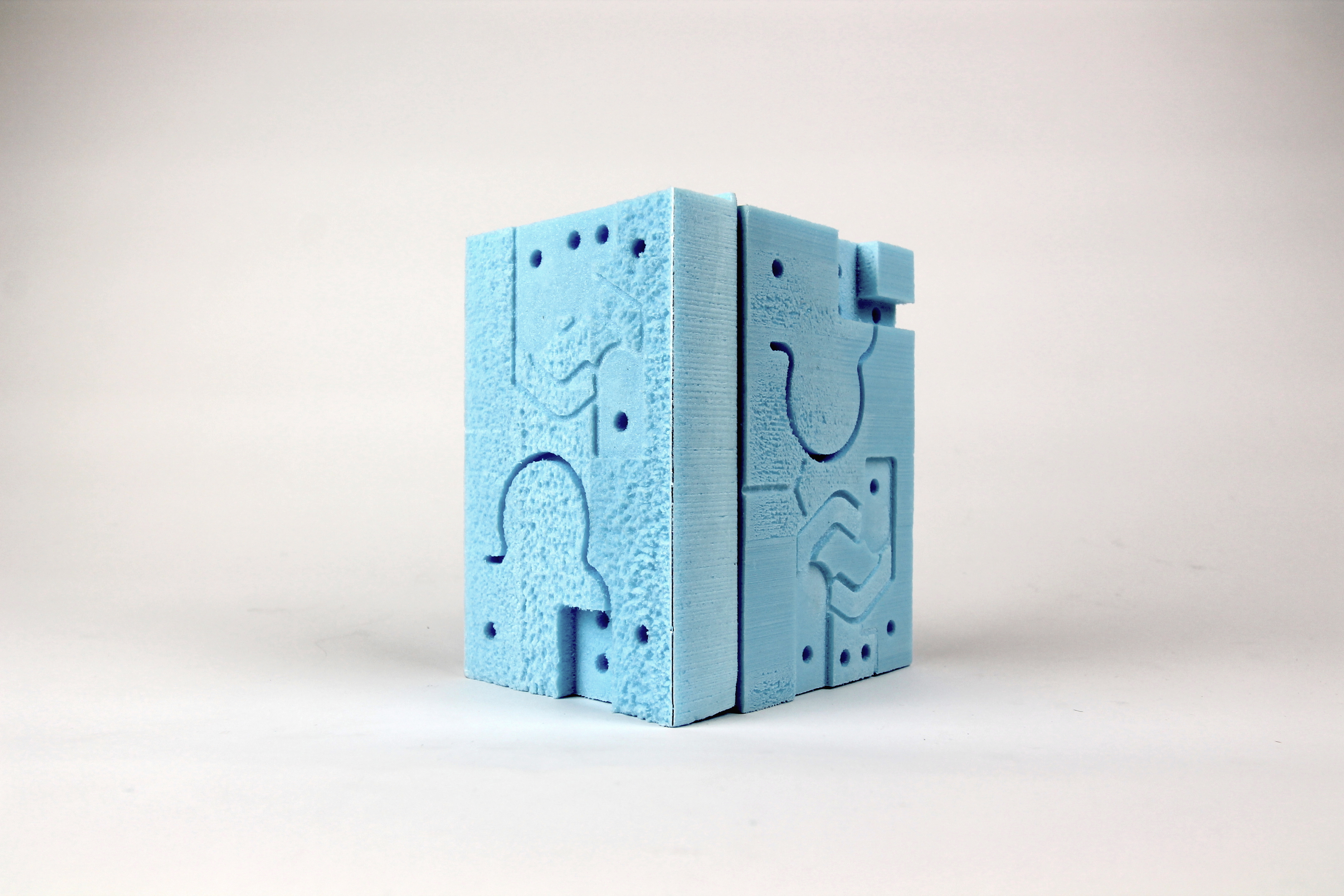 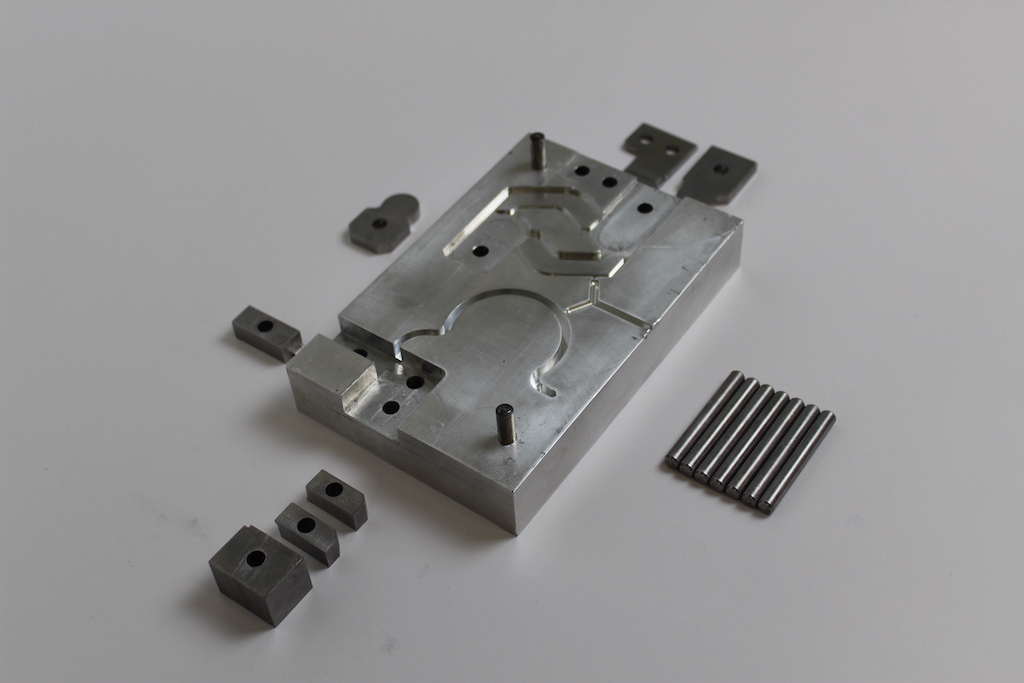 Manufacture
CNC Machining
Adjustments made from the foam prototype were put into the CAD model in Solidworks and then the final aluminium block was CNC machined. Sprue holes were filed by hand as we didn’t have access to a small tool for it to be automated.
Centre Lathe
The line up pins were turned on a lathe to create the chamfers which help with location.
Reaming
Locator holes were drilled when the mould was fully assembled in order to ensure perfect alignment using a 5.8mm bit. The holes were then reamed at 6mm for greater accuracy.

Wobbler
A lot of the inserts were machined by hand using special tools to create certain forms. An edge finder was used to find the centre of cutting tools to make accurate cuts for grooves and notches.
Surface Grinding
Using precise measuring instruments the inserts were measured and surface ground to the nearest 0.25mm to avoid flashing during the injection process.
3 Million in 3 Months?
A production task was set to the group to explore how we could adjust the injection moulding process in order to facilitate the production of 3 million units of the ski pole holders in 13 weeks.

Many test injections were iteratively carried out to determine the best pressure and speed at which the plastic should flow into the block. Each test injection was timed and compared based on the amount of flash, shrinkage and warp.

In order to achieve the 3 Million target the mould block was redesigned to inject 4 widgets in one cycle. 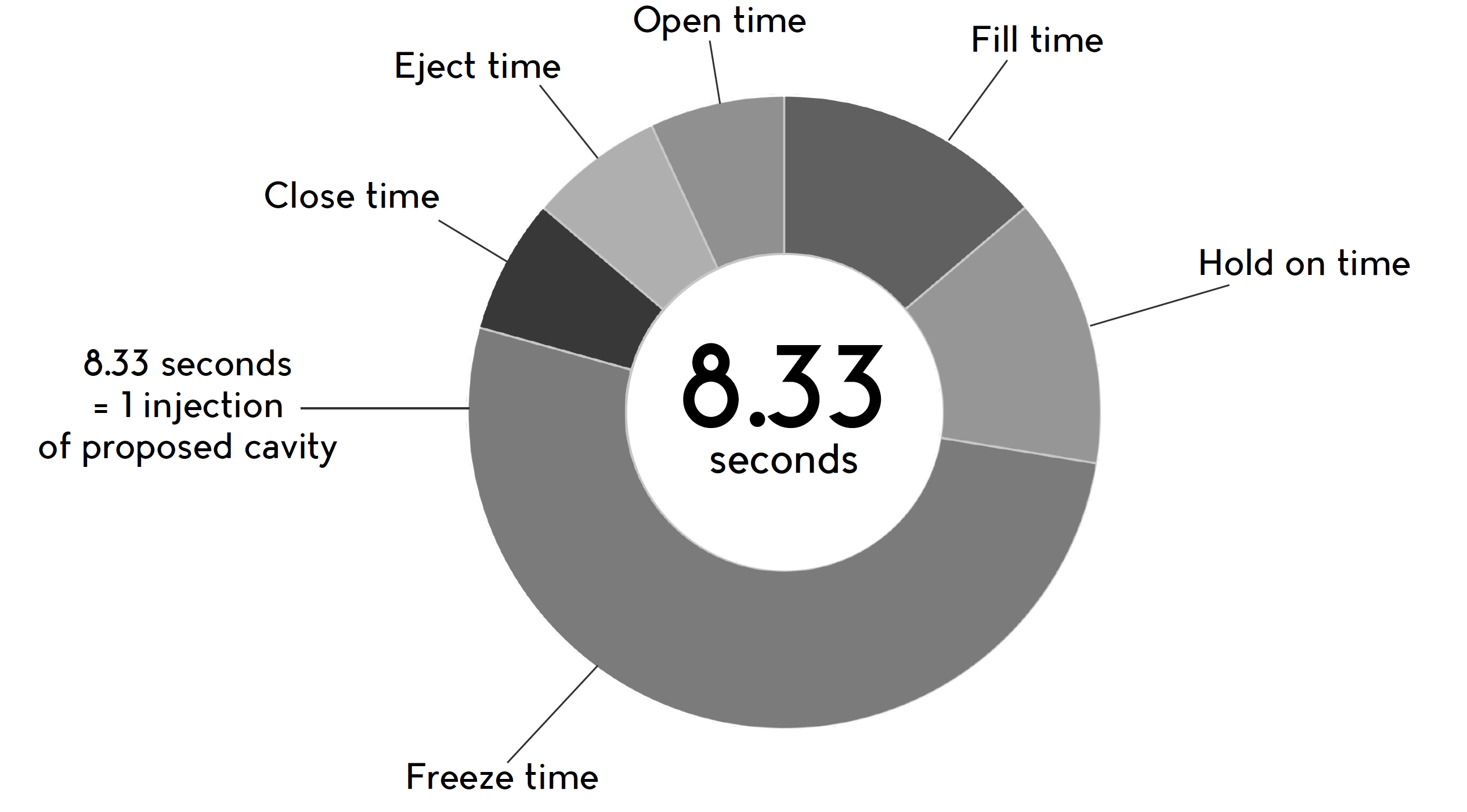 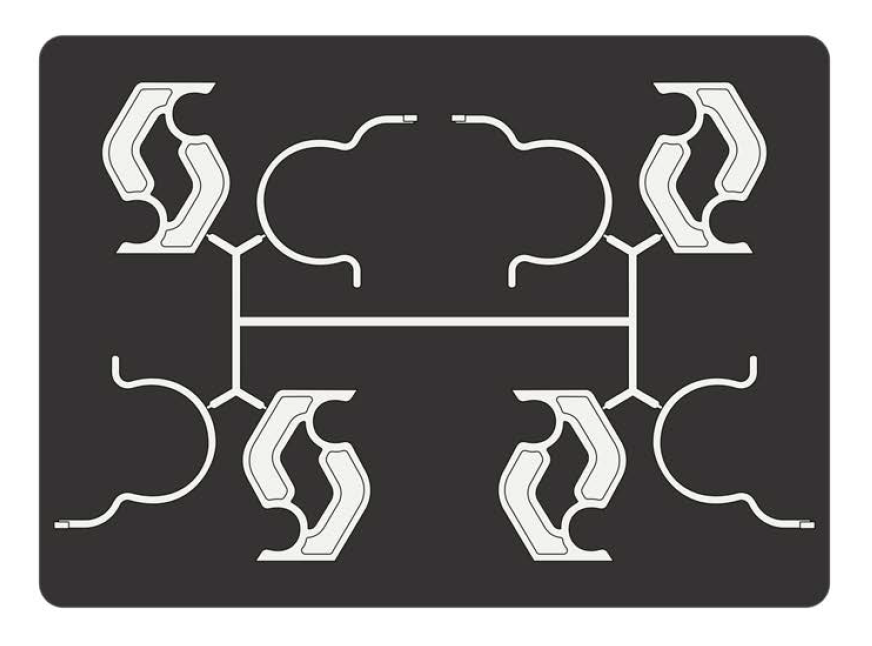 ← Back to Home
↑ Back to Top
Say Hi!
Thank you! Your submission has been received!
Oops! Something went wrong while submitting the form.